Whether you have a date, pal, or riding solo this Valentine's Day, come out to CASS Winery for the Valentine's Dinner & Comedy Show featuring some KILLER Hollywood talent! The wine & beer bar will be open all night, and our Chef has prepared the perfect menu for a sexy night out. Snag your tickets, they'll sell out fast! Limited dinner tickets available!

Already have V-Day dinner plans?  Join us for the 7:30PM showtime for some post-dinner drinks & lot's of laughs!!

Available to the first 100 tickets sold! Includes Preferred, Reserved Table Seating for Dinner & Show and Early Entrance for dinner at 5:30PM.  (For Groups larger than 2, please reserve tickets together)

Includes a Reserved seat at a Shared Table for Dinner & Show with entrance at 6:00PM.  (For Groups larger than 2, please reserve tickets together)

21+ Only. No Outside Food or Beverages. Dinner is Pre-Sale only; Tickets will not be available at the Door.

Kim McVicar is a comedian and former professional dancer (emphasis on former) from Canada. She has two standup specials “Kim McVicar: Tap Dancing On My Mother’s Grave” and “Kim McVicar: Please Notice Me.” They can be seen on Amazon Prime, iTunes, YouTube, and many more streaming services - and have been streamed over 8 million times. You can hear her regularly on SirusXM (She’s So Funny, RawDog), Spotify and more.

Kim is a regular at the Hollywood Improv in Los Angeles, in the Top 25 on Roast Battle at The Comedy Store, and got the most views in the US for the Laugh Factory’s 2016 online standup competition. Kim has also performed around the US, Canada, and Ireland – where she won the comedy competition “Battle of the Axe.”

Kim’s has millions of views online content - follow her on TikTok/IG @Kim.McVicar to see where and what she will be doing next.

John Wynn, a college professor turned comedian, asks audiences to look at life through his charmingly skewed perspective. His quick wit and clever jokes have gotten John out of many awkward situations, for example, employment as a college professor. Named Miami New Times’ Best Comedian, John was also the Miami Dolphins’ Official Comedian, though he was not as funny as their season record. John recently took first place in the World Series of Comedy and was the winner of the inaugural KLIQ Comedy Contest in Los Angeles. John has performed at the Laughing Skull Festival and was a semi-finalist for NBC’s Stand Up for Diversity. His comedy can be seen on Hulu and can be heard on Raw Dog Comedy on Sirius XM radio.

Heather Pasternak is a Los Angeles based comedian and NYU Tisch school graduate. She had her network debut on CBS’s The Late Show with Steven Colbert. Her other television appearances include FOX’s New Girl, The Mindy Project, Netflix’s Cooking on High, and more. She performs in comedy clubs across the country and internationally. Heather is the co-founder of The Comedy Partners, leading team building workshops for companies like Amazon, Cisco and American Express. She just released a comedy special called Slay at Home Mom.

After a 25 year career as the head of marketing at movie studios like Disney, Jim Gallagher is finally telling the truth…about everything.  His observations from inside Hollywood, marriage, fatherhood, and everything else that frustrates him are infused with a hard-fought wisdom and delivered in his singular voice.  He arrived on the LA comedy scene in 2018, quickly became a regular Friday night performer at The Comedy Store, and currently appears in clubs and festivals across the country.

VIP Tickets are SOLD OUT; please select another ticket tier

NOTE: Any discounts (including wine club discounts) will be reflected in the cart once you check out.

WARNING: Many food and beverage cans have linings containing bisphenol A (BPA), a chemical known to the State of California to cause harm to the female reproductive system. Jar lids and bottle caps may also contain BPA. You can be exposed to BPA when you consume foods or beverages packaged in these containers. For more information, go to: www.P65Warnings.ca.gov/BPA

WARNING: Drinking distilled spirits, beer, coolers, wine and other alcoholic beverages may increase cancer risk, and, during pregnancy, can cause birth defects. For more information go to www.p65warnings.ca.gov/alcohol 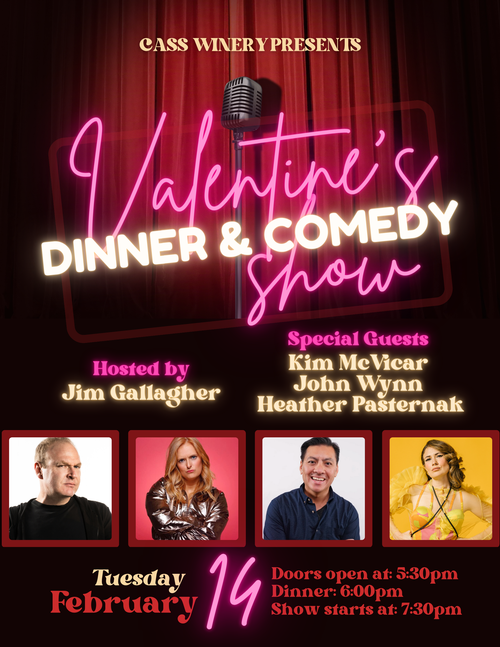 During the COVID-19 crisis, we have closed our normal Tasting Room doors to the vibrant hum of cafe and event activity. We miss you, and wish you strength and health at this time.

In order to serve our local and national communities, we have kept both the kitchen jiving and the packing room in a frenzy!

For those nearby, please enjoy our full cafe menu + dinner specials TO-GO. Simply preview our online menu and call the Tasting Room to order at 805.239.1730 and enjoy 10% off your order with bottle purchase.

Our wine sale is for both near and far!